In 1981 after having toured 3 shows, panhandling, the need arose to explore new territory with the spectators.

The idea was to use the real scenery of the street, to create an imaginary context experienced with realism, and to feel the impact it would cause. It was therefore no longer a performance in the proper sense, but a situation where the work was more similar to laboratory research. It resulted in a concept which later became a pillar in all of Royal de Luxe’s creations: « imaginary realism ». In a pedestrian street a guard using a large ruler and chalk draws a parking lot as seen from a helicopter, the size of a vehicle’s parking place corresponds to that of a shoe. He applies himself with conscience and does not seem to hear the questions asked by the passers-by. He draws the entrance, the exit, places small prohibited direction signs, 10cm high stops and marks the itinerary with arrows. Then he places a rectangle near a small sign that reads CASH DESK, sets up a stool and a doormat next to it. A few people are starting to gather around the parking lot puzzled by the situation, while noting the presence of the passers-by, he seems not to be paying attention. When a person appears and stops at the stop sign at the entrance (someone of the company), an awesome silence descends on the crowd. « The shoe driver » after glancing right and left enters the parking lot and sits down on the stool, takes off his shoes and asks: - « How much? » - « 50 centimes for half an hour, 1 franc for an hour… » Each person observes keenly, ears strained to try to catch the words spoken normally without raising the tone. The driver gives 50 cts, the guard signs a receipt, puts the shoes down somewhere in a parking place and the driver departs in socks, to do his shopping. He winds up an alarm clock and waits with the world’s utmost patience, as a real guard does, tired of his job without expressing his emotion. What follows is logical, there will be no dramatic progression: the parking lot fills up partially and the drivers one by one get their shoes back until the alarm clock rings; at which moment the guard takes back his accessories and disappears into the street. In the street it is always difficult to get attention. The discovery was the intensity of the audience’s concentration. The creation of a kind of hypnotism where people observe the details without the slightest theatrical effect with the weight of silence it exudes.

There was an astonishing path there, rich to develop, giving the possibility of inviting the spectators into poetic dreams.
Strange fact: some passers-by immediately understanding the situation only laughed passing their way, causing the questioning gaze of the assembly. 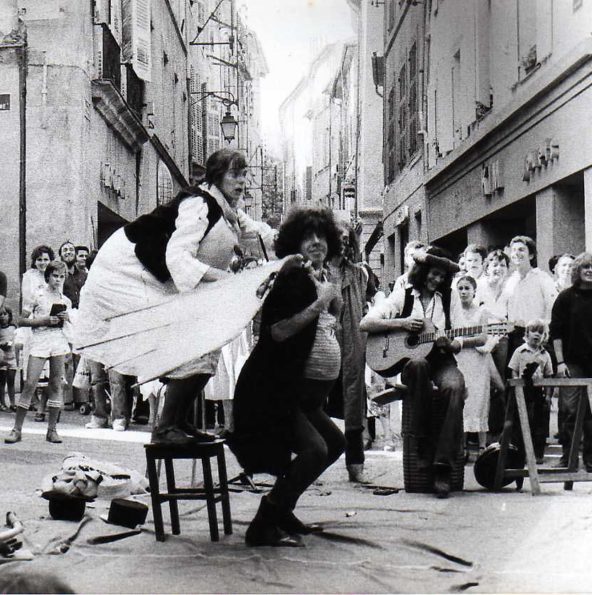