The Giant of Guadalajara

"The Giant of Guadalajara" is a creation presented in Guadalajara, Mexico from 23 to 28 November 2010 at the invitation of the Mexican Presidency. This show was created especially for the Centennial of the Revolution and the Bicentennial of Independence - 3.5 million spectators. 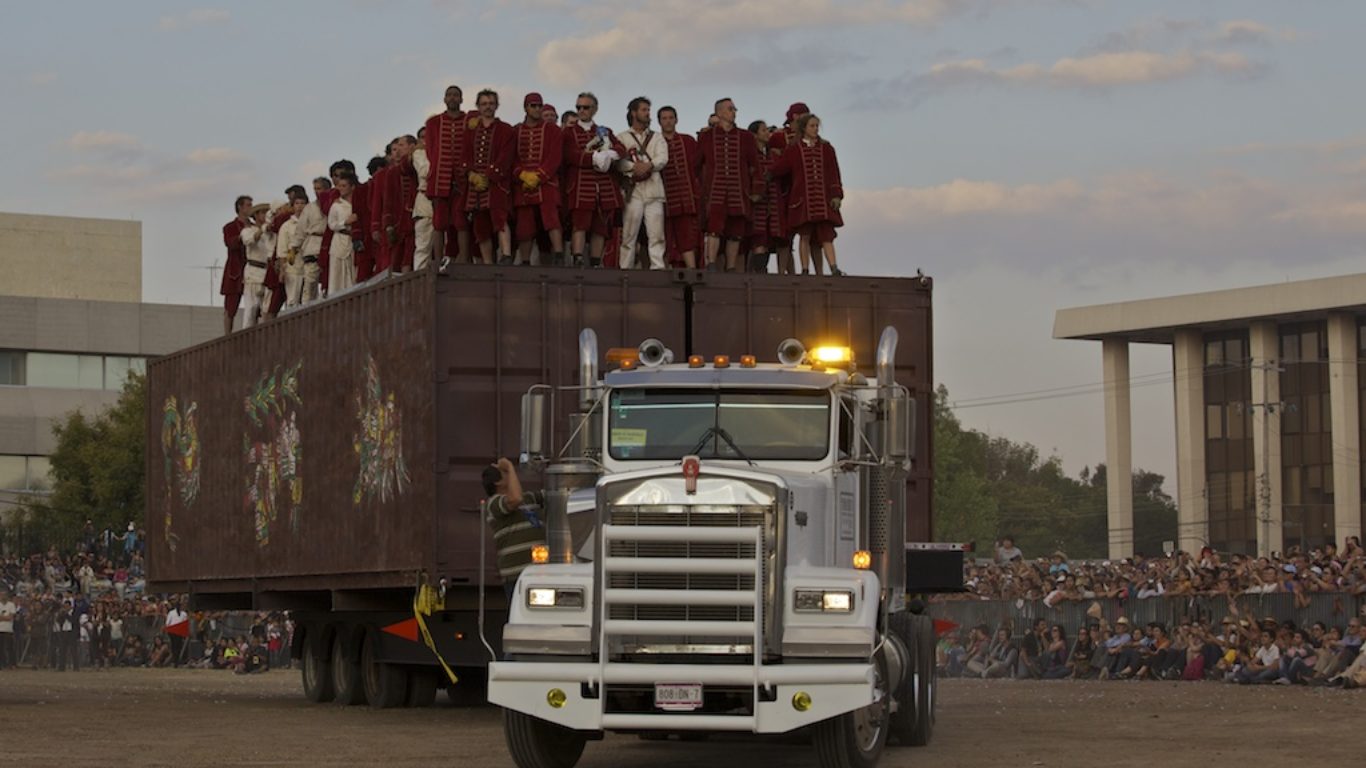 When Hidalgo gave the cry of Dolores, it resonated throughout Mexico and far beyond : it travelled through time.

At that time, a Giant perched in the mountains heard it ... he was a lonely pawn, issue of an Indian mother and Creole father. But when the Giant appeared before the rebel army, the men were so frightened that Hidalgo hid him in a sarcophagus, somewhere in Guadalajara to prevent him being killed by them. It is unclear who cared for him during this time, given that those responsible for this task died in the battles that shook the country. Many historians are now wondering about the location of his burial. 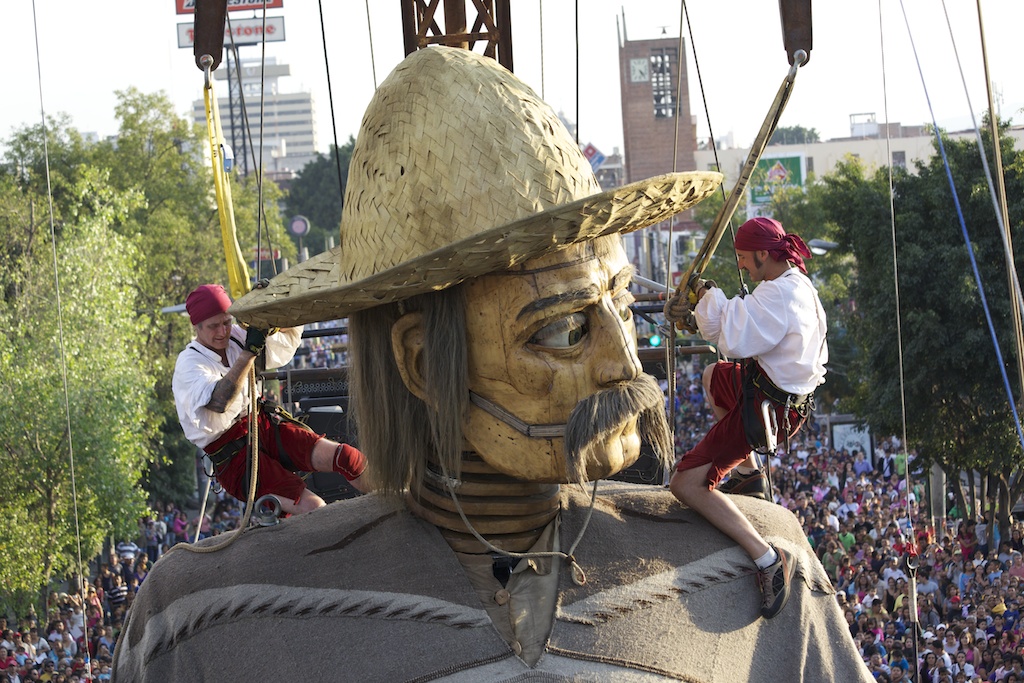 One hundred years later, in 1910, the niece of the Giant called "Little Girl-Giant" settled in the State of Morelos (named after the illustrious fighter who continued the work of Hidalgo for Independence). 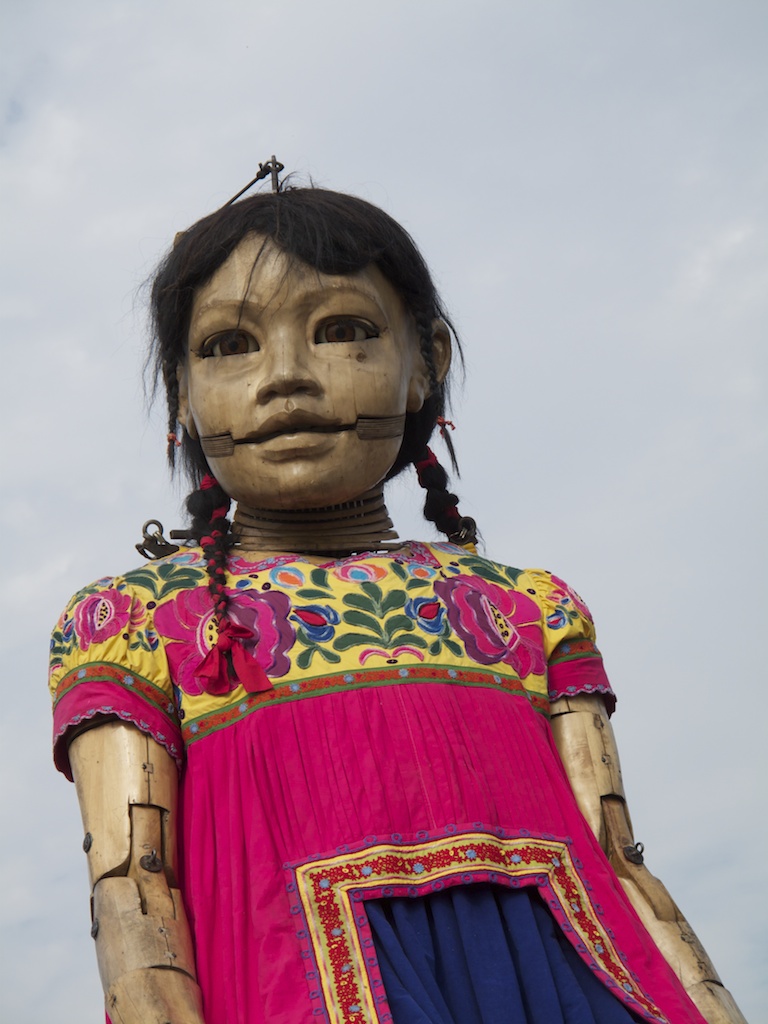 Some say, she had made the journey to find her uncle, and others tell that Zapata, one moonlit night, had spoken to her. Again, no witness can confirm this legend. 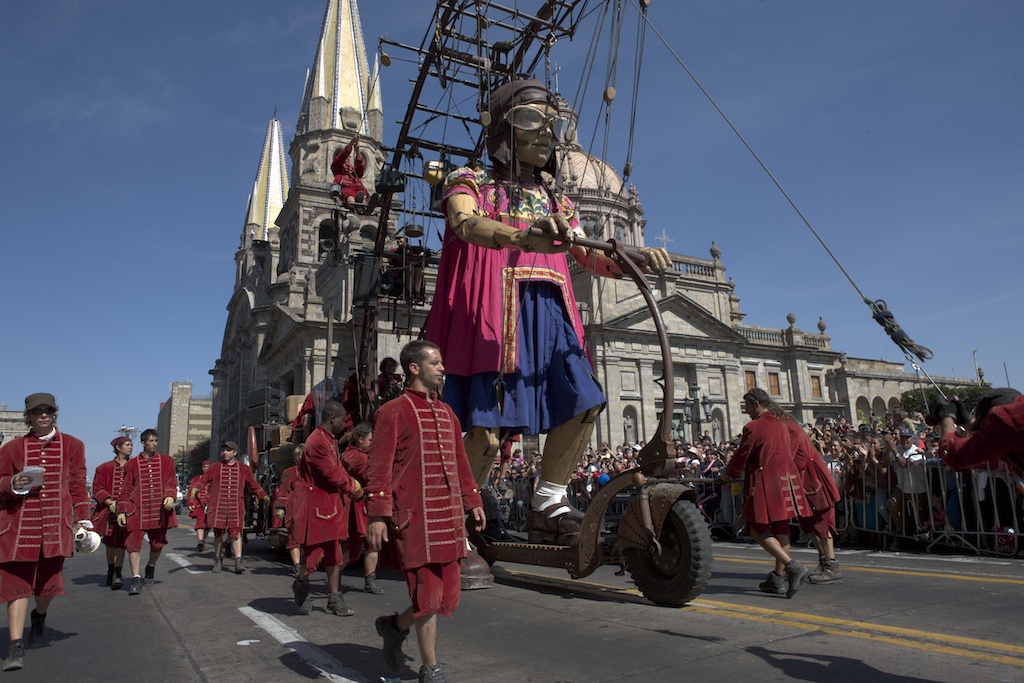 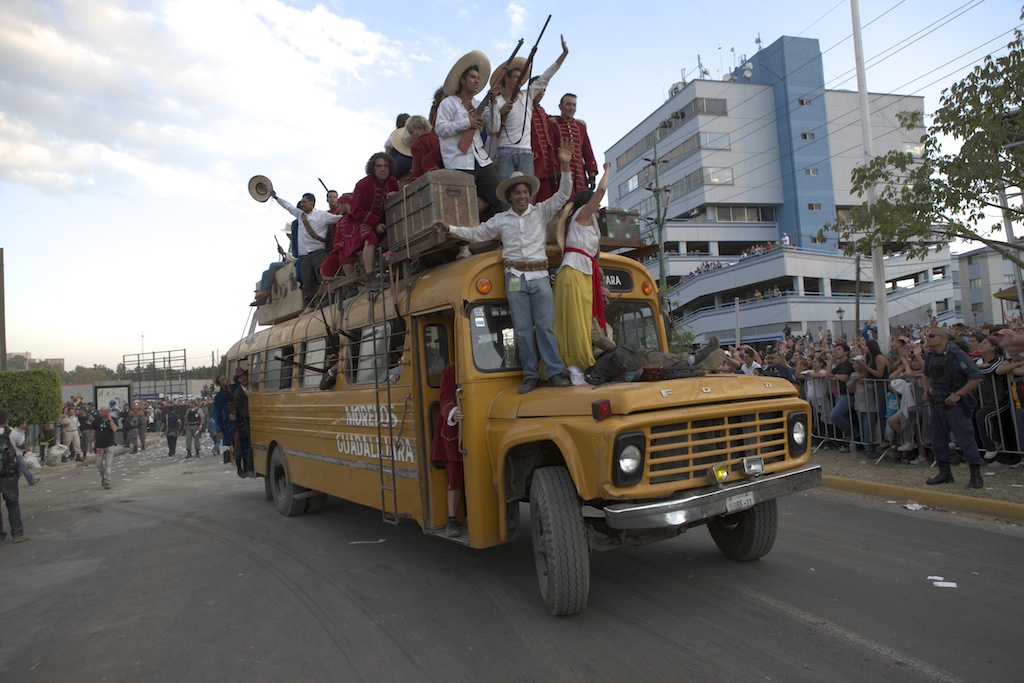 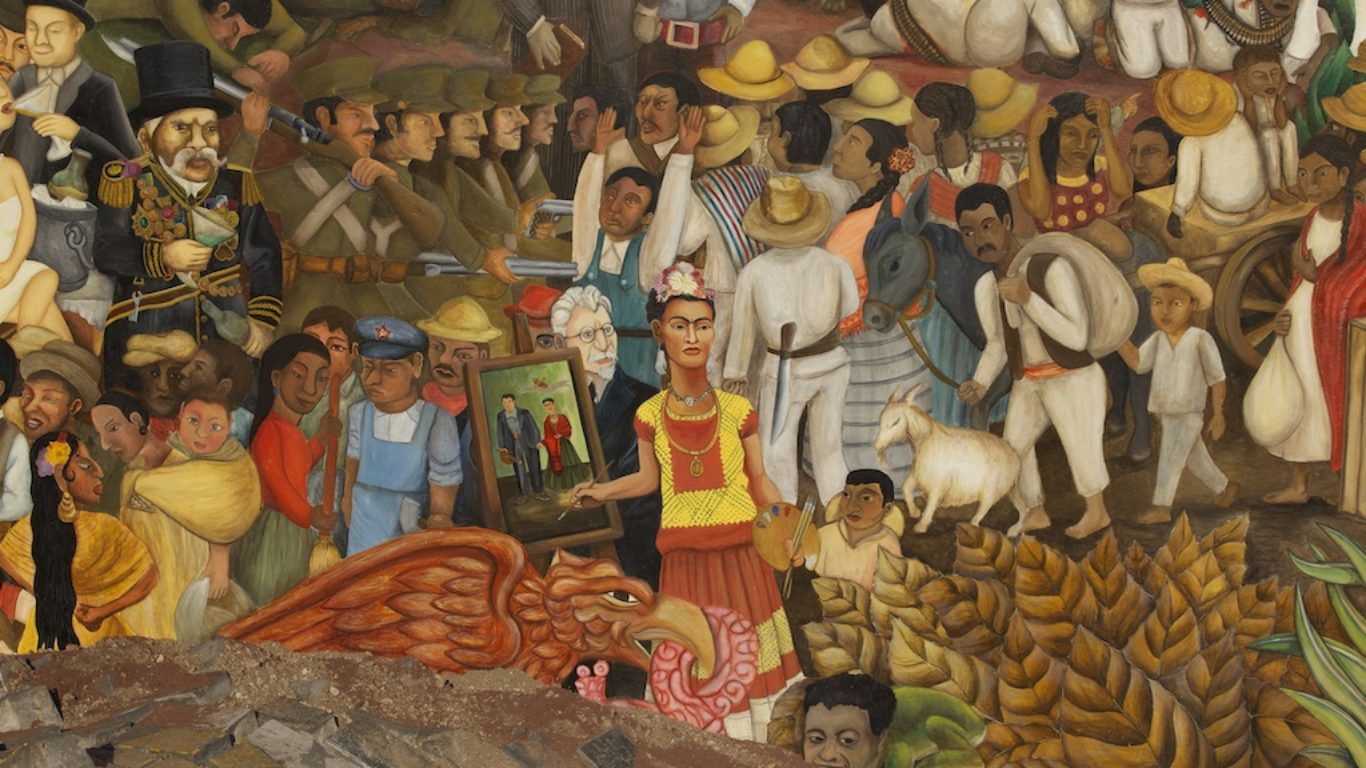 Which God was it that decided, in the year 2010, to send an unknown mural by Diego Rivera from the sky to the city of Guadalajara ? It warned the Little Girl-Giant that the time had come to find her uncle. 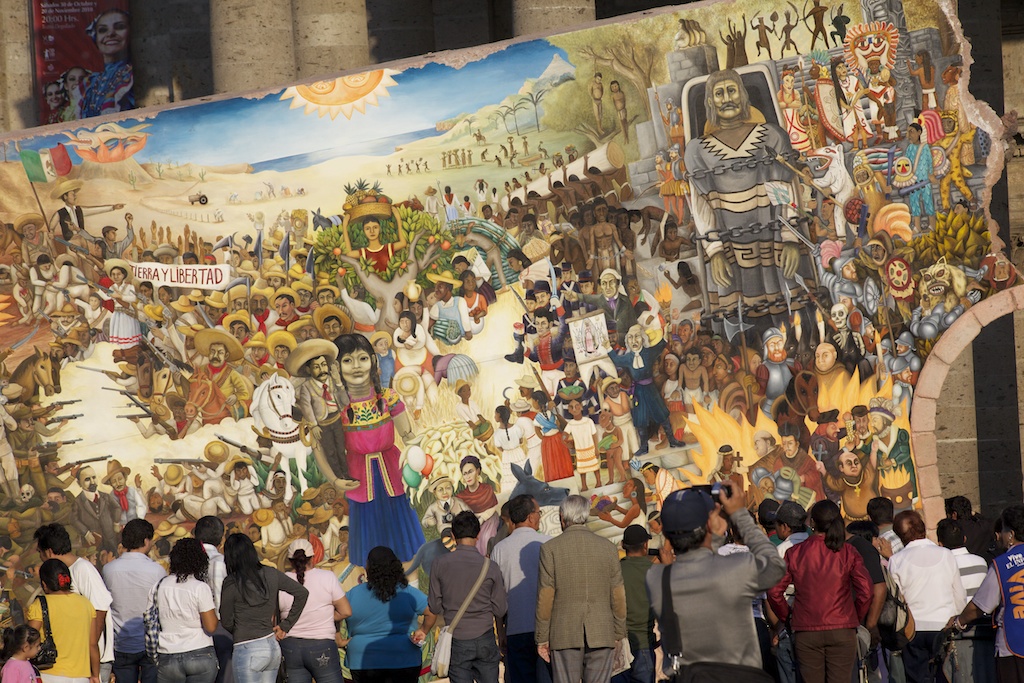 The next day, a package was placed in a square : it was a block of ice containing Xolo, the god-dog with obsidian teeth. A sleeping dog, sent as a gift to the Little Girl Giant. 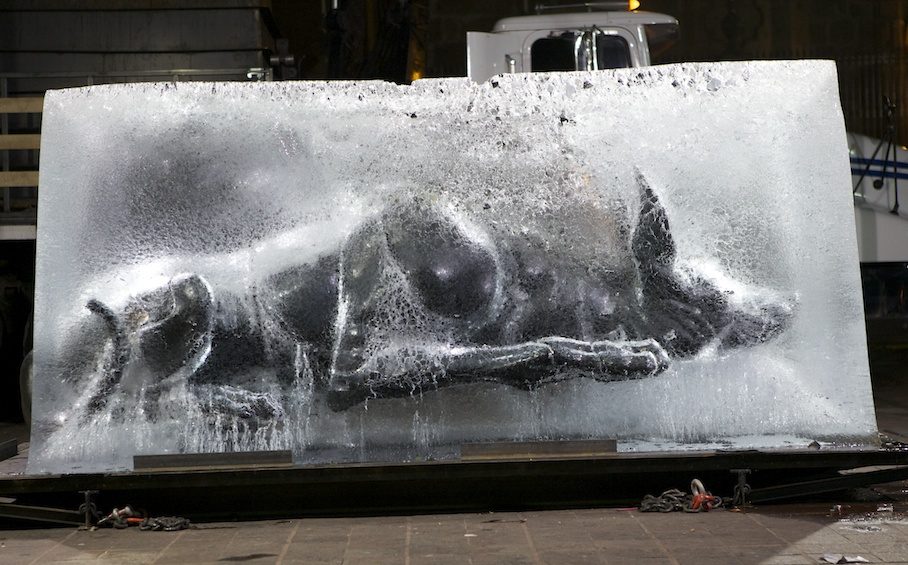 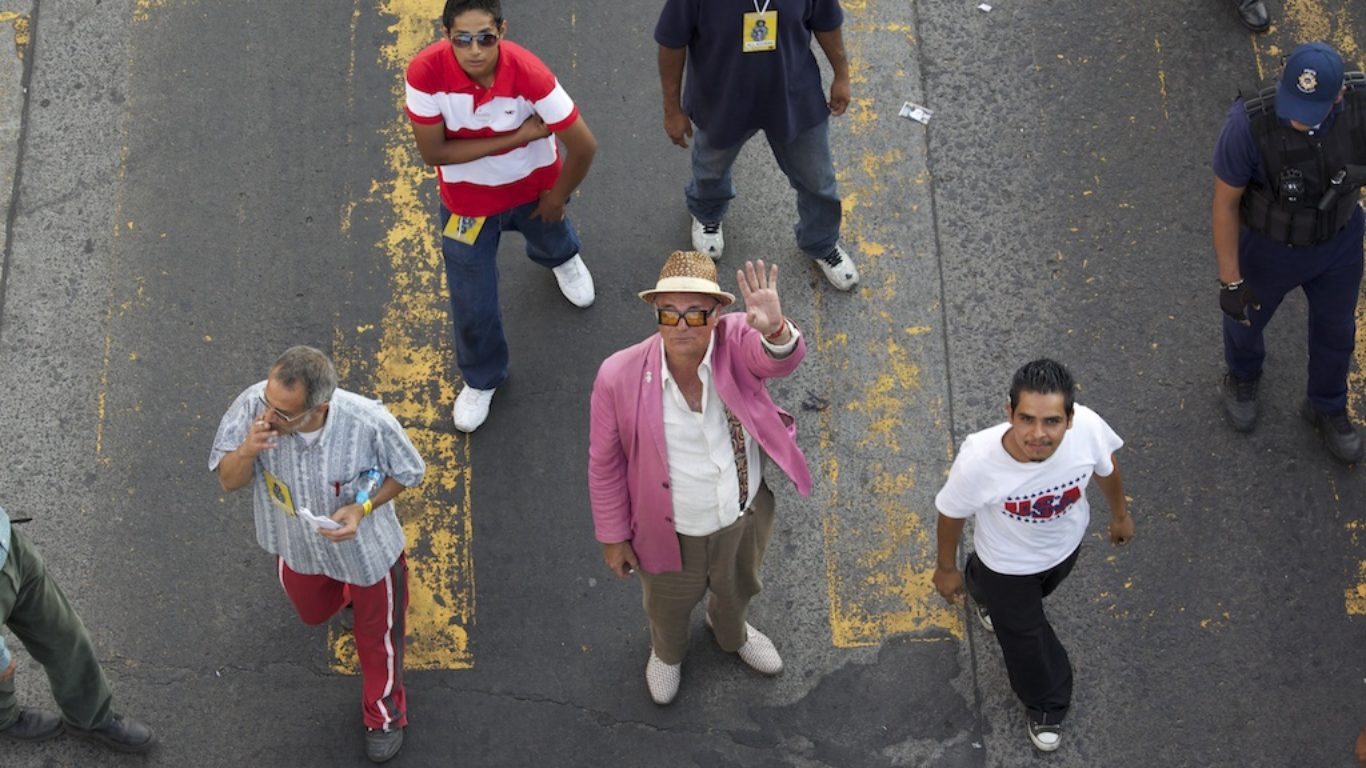 A few days after the ice had melted, Xolo, who was then bounding around the streets, flared the location of the sarcophagus. 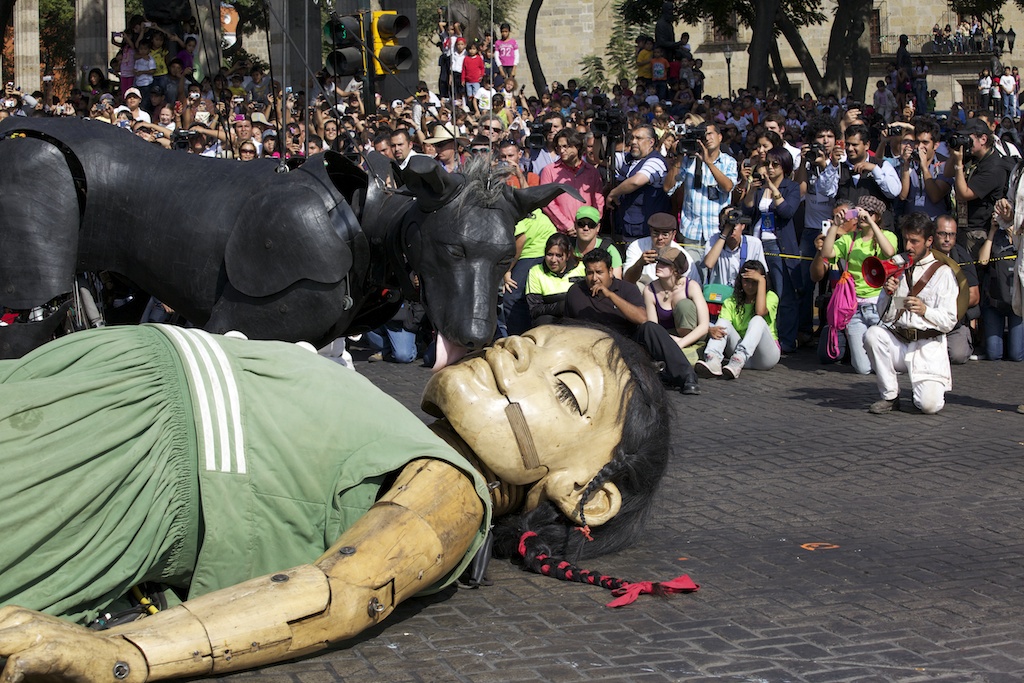 Once the great Giant had been rescued, the three companions vanished, taking some Mexican earth with them. 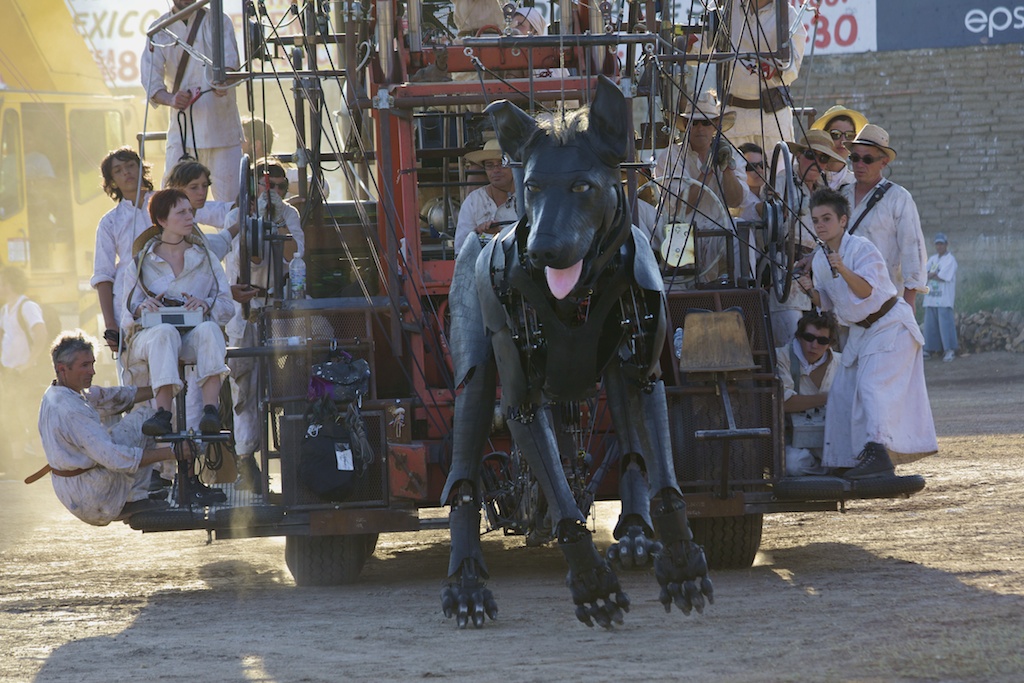 Is this a tale whispered by the mountains ? Or simply one of the stories Frida Kahlo deposited into the ears of Diego Rivera to lull him to sleep ? Or a soft and violent dream Orozco saw in transparence on the walls of the city ? Whatever it may be, on stormy nights, you can hear the ringing laughter of Pancho Villa in the Mexican sky. 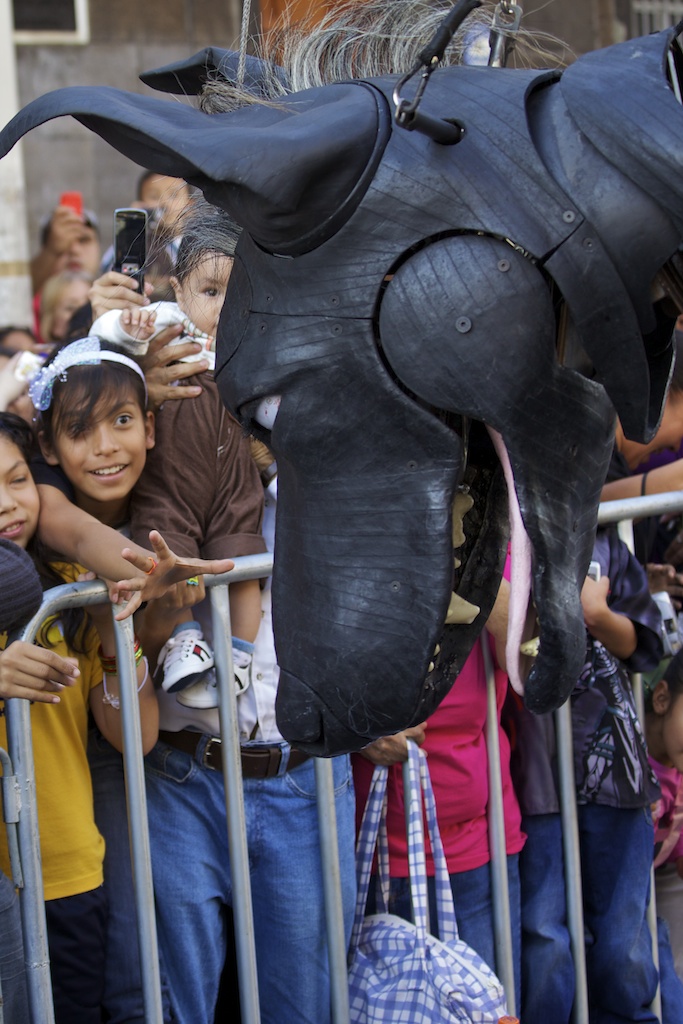 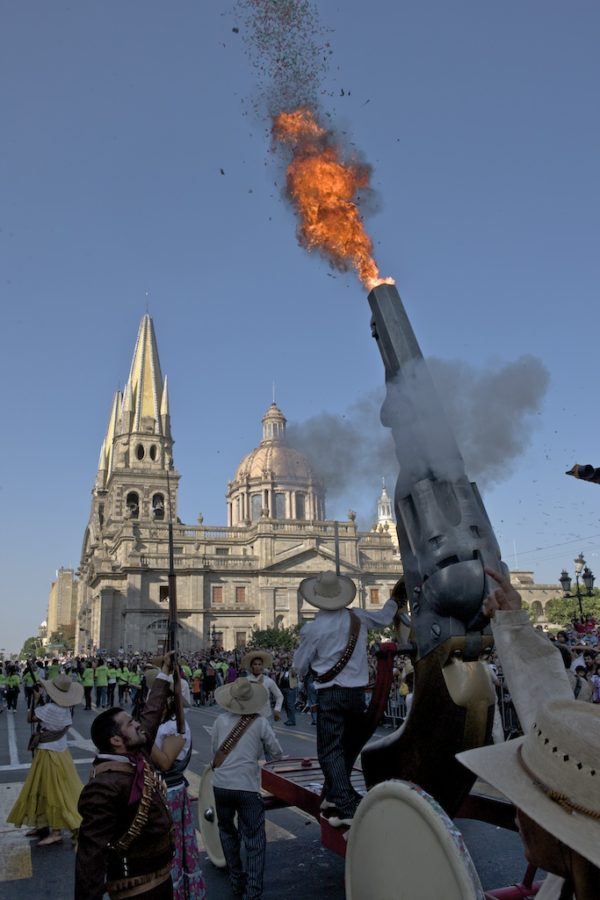 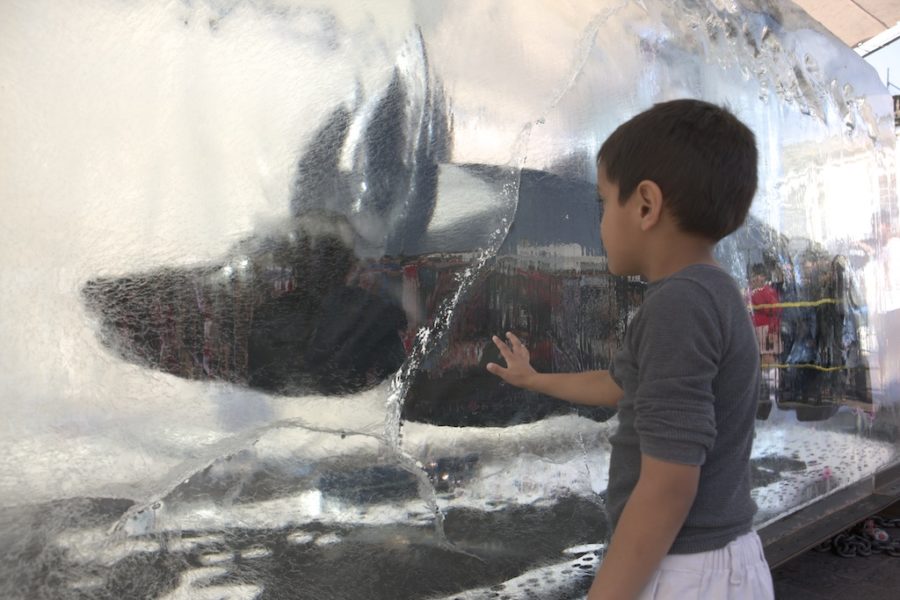 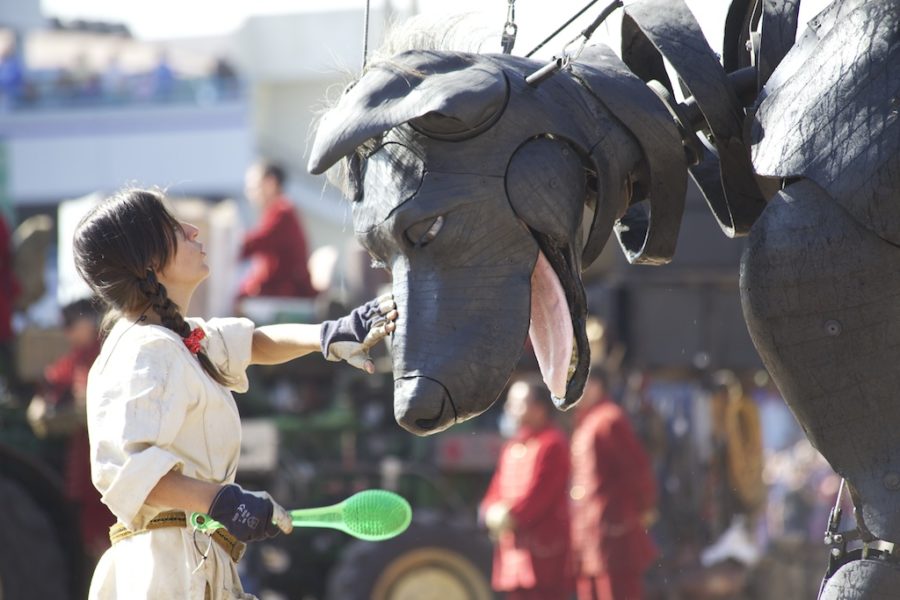 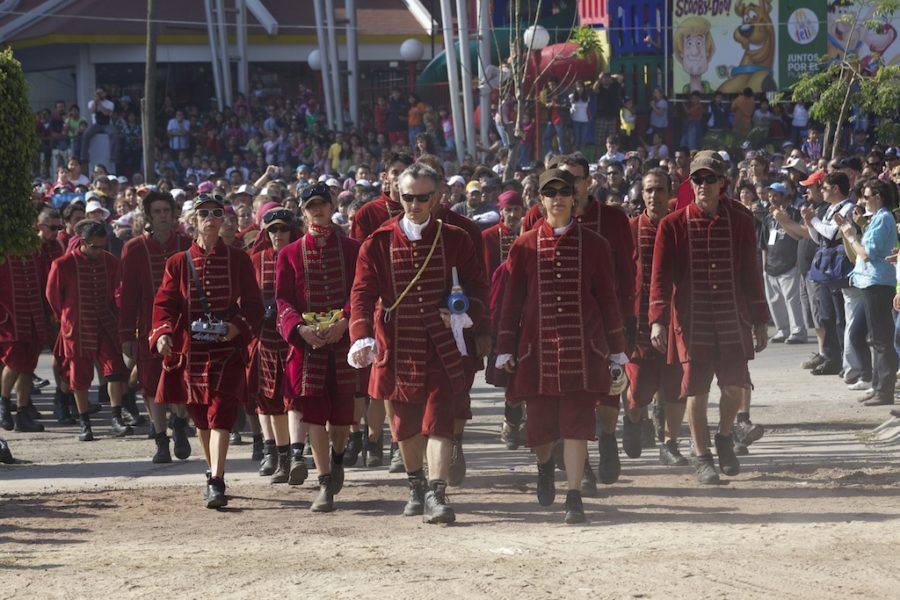 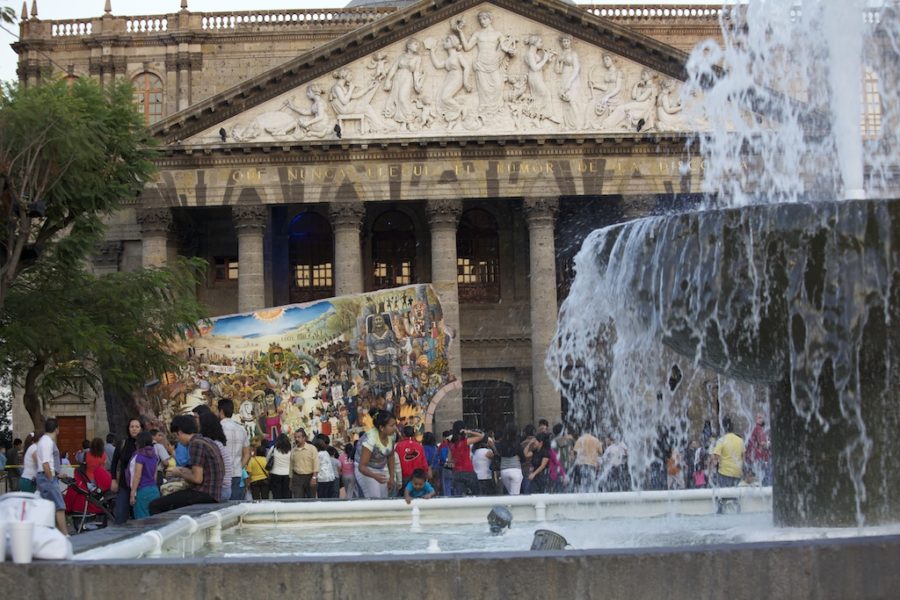 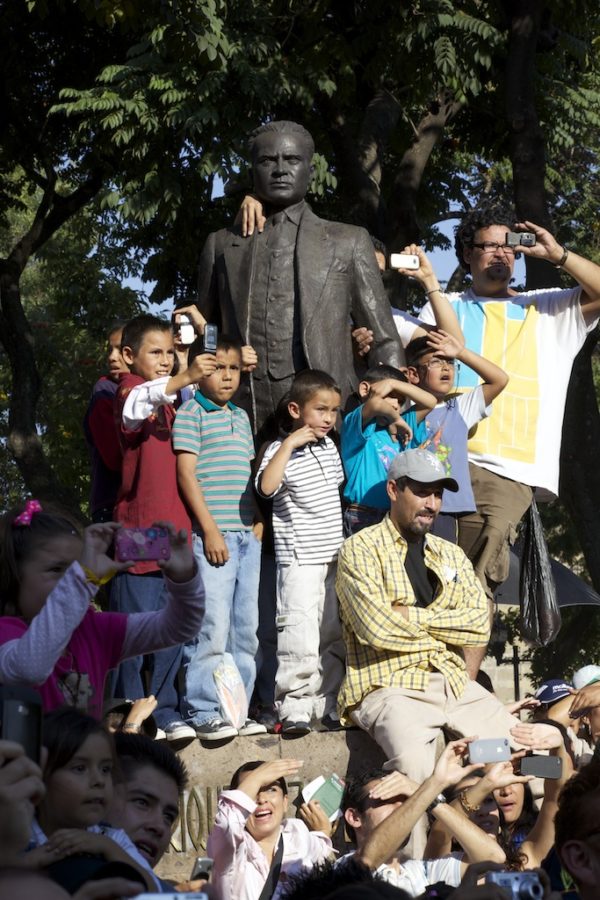 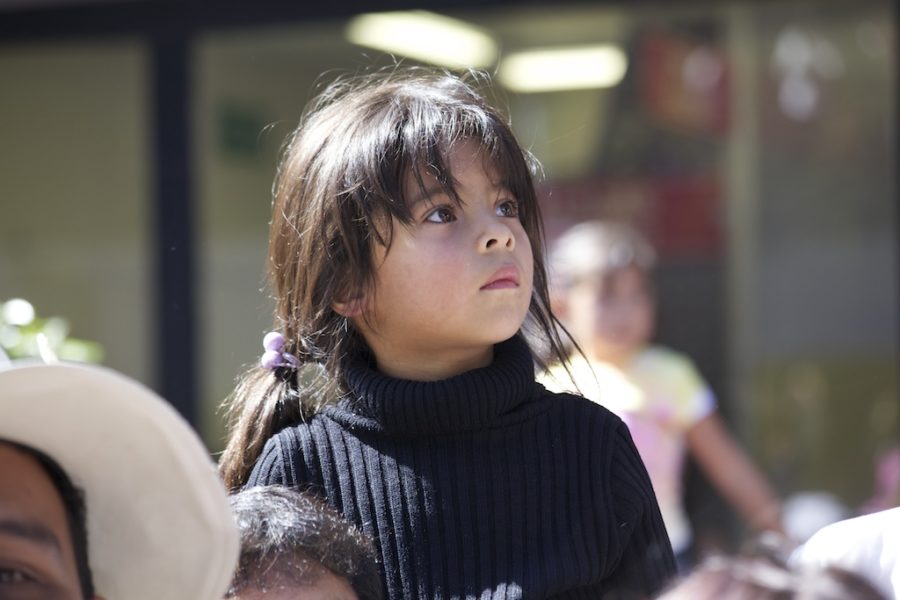 The story of "The Giant of Guadalajara"

Postcard from the show (front) 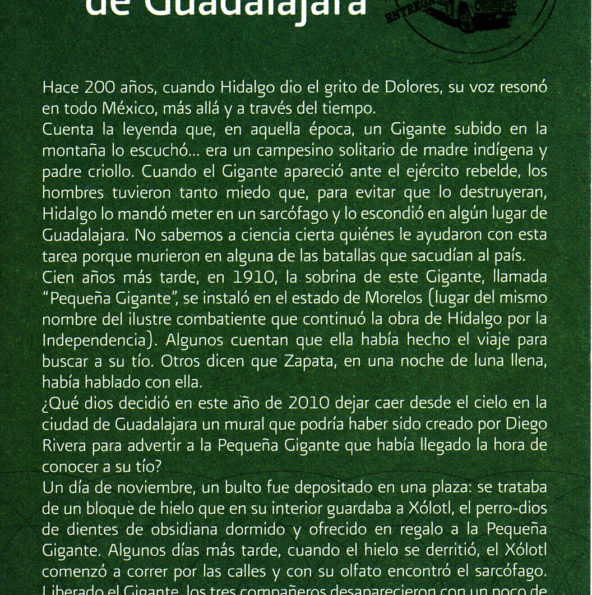 Postcard from the show (back) 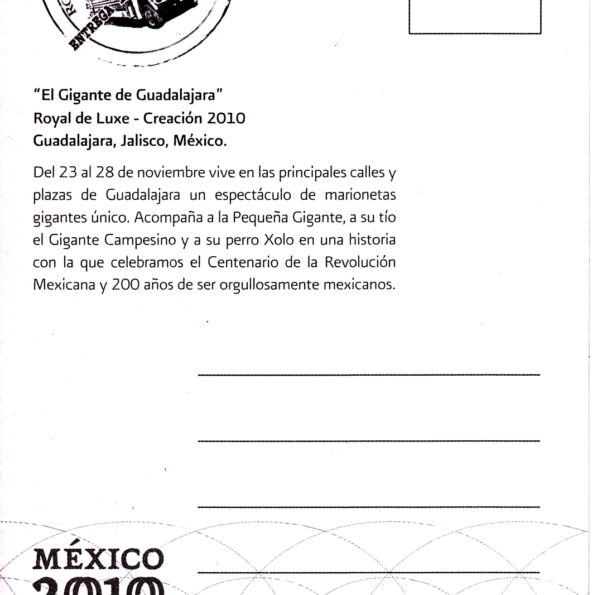 During the final parade of the show, the giant revolver sends out poems by famous South American authors on the themes of peace, love and friendship. 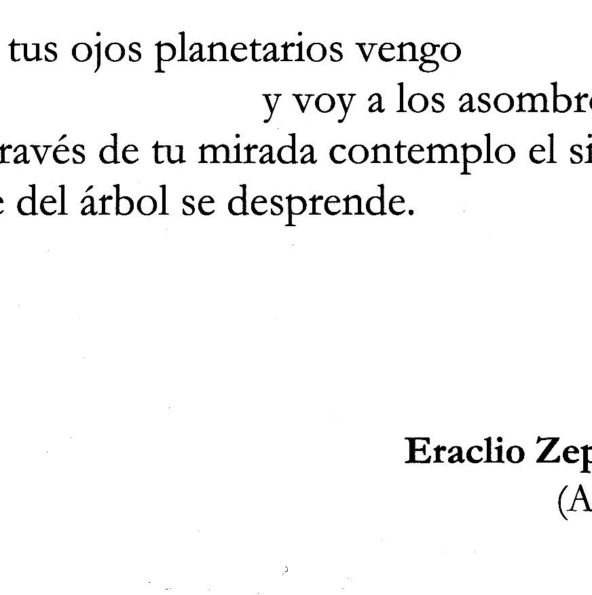 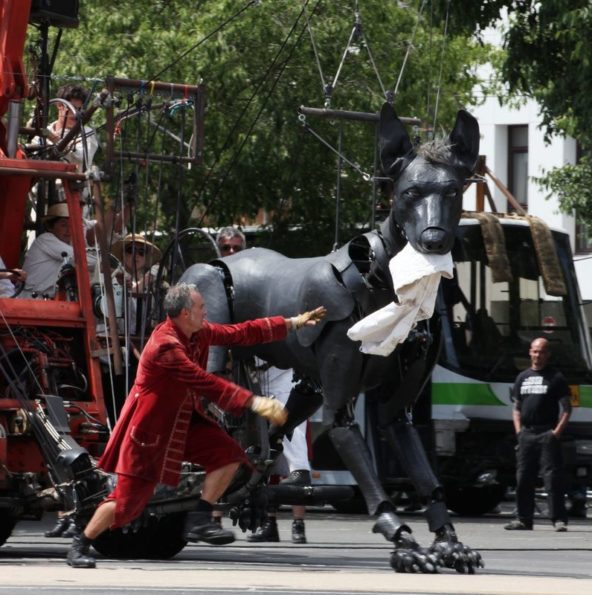 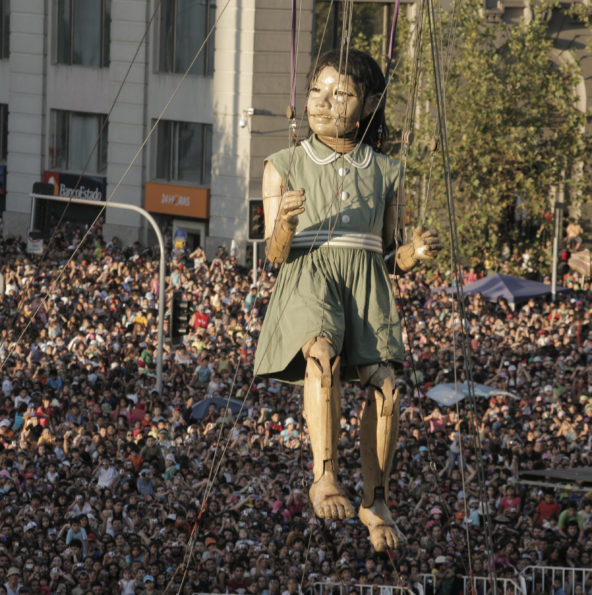 Giants spectacular - 2010 The invitation See the creation
Previous
Next