The wall of light

1986.
In those days, Royal de Luxe, although penniless, was living in a huge manor lent for free by a Canadian landlord who had just arrived in France. 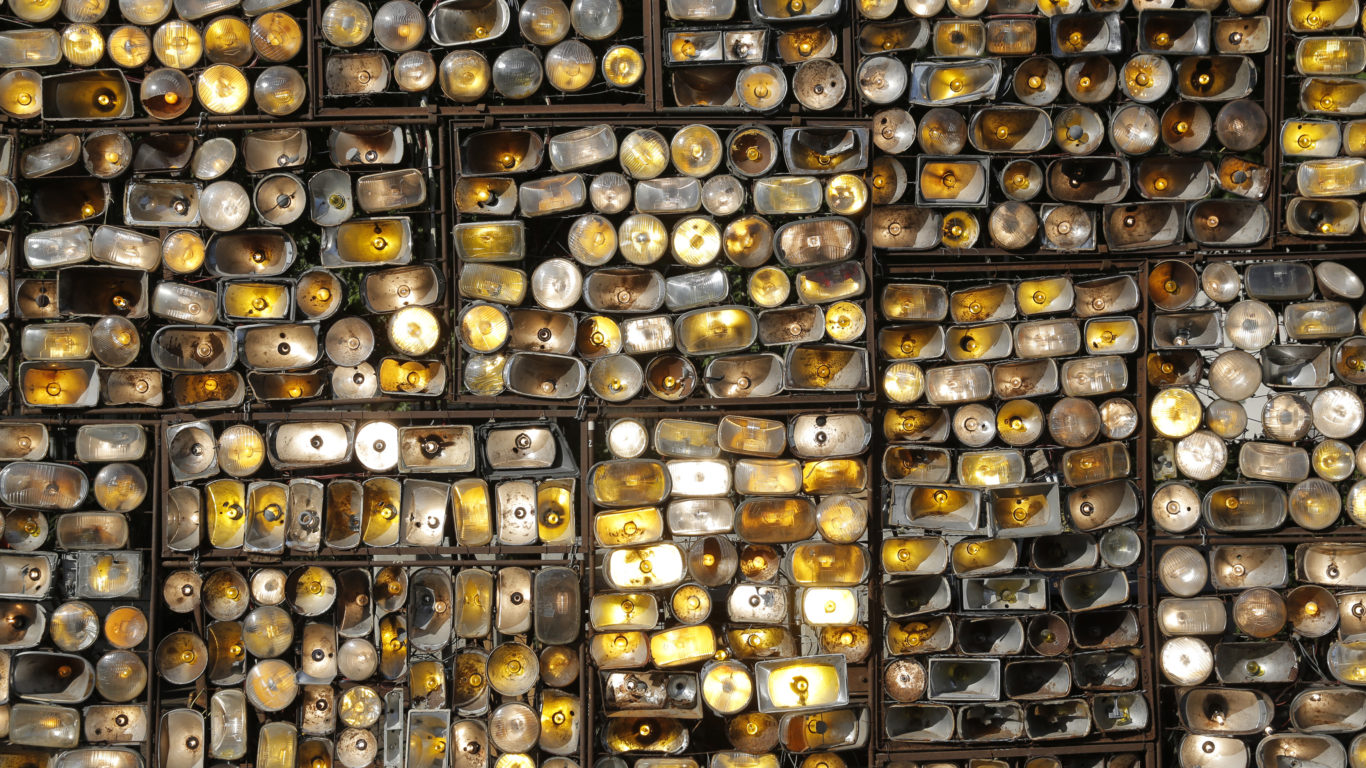 The castle of Serrant situated 30km from Toulouse provided a place to stay and to create for the company, which at that time was living in a community not by choice but for economic reasons. Impossible to heat due to the volume of the rooms, the main meeting spot was in the kitchen next to the fireplace. Hours of imagination were developed in this place. Going to sleep at dawn to start working a few hours later, an infinite number of impossible stories took flight there. The landlord, with his farming machines and staff, regularly cleaned up the immense parc full of tall trees and wild grass, to make it a clear and maintained space without ever talking about money. The mansion was huge, built at the time by one of Napoleon’s generals. It was situated 5km from Lavaur, in the middle of the countryside.

The idea for the Wall of Light appeared right after the show of Roland de Roncevaux, performed in Blay near Bordeaux. A parade was to happen at night, I asked the team to put rows of headlights at the front of the vehicles. A few weeks later in that very kitchen the concept of a huge wall of headlights appeared to me: both to keep Royal de Luxe busy, as we were having a dip in activity, but also to build a sort of unique mythological lighting in the hope of using it for upcoming shows. The suggestion raised enthusiasm. 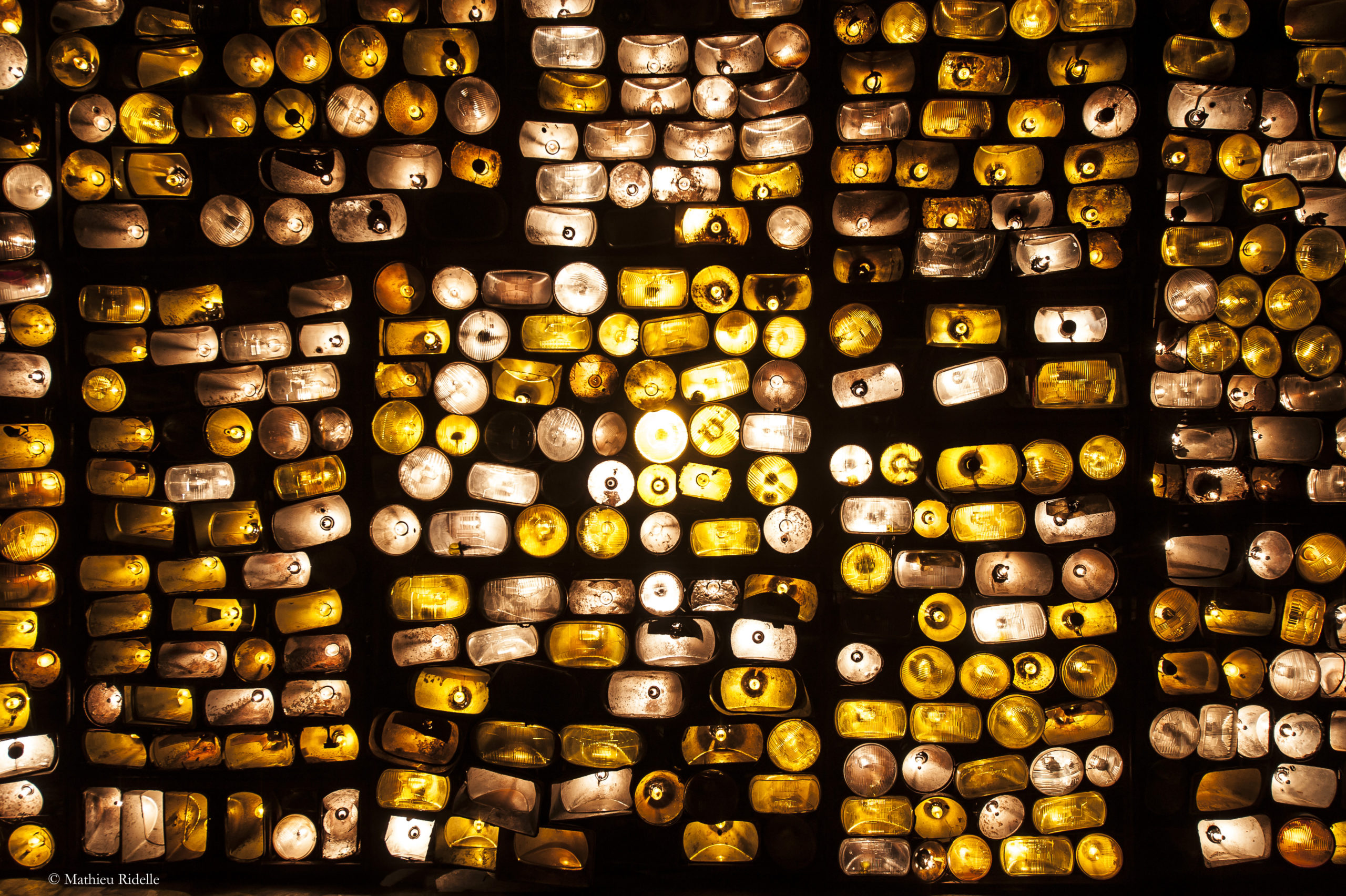 And there we were suddenly transformed into headlight harvester, contacting the owners of car headlights. Armed with screwdrivers, wire cutters and other small tools, we spent our days in the rain, in the mud or climbing on the vehicles piled up like wedding cakes, taking apart those little treasures to put them, at the end of the day, in a big pile which the boss would sort, and depending on the company, gave us a third or half of the harvest that he considered uninteresting for his business. In the evening we looked hungrily at our growing stock, that little game kept going for three weeks, at the end of which we had in our possession about 150 car headlights. Of course during this exercise we would collect here and there the necessary number of lightbulbs, and it was the lesser evil considering the time and energy we were putting into it. Then the assembling work began. 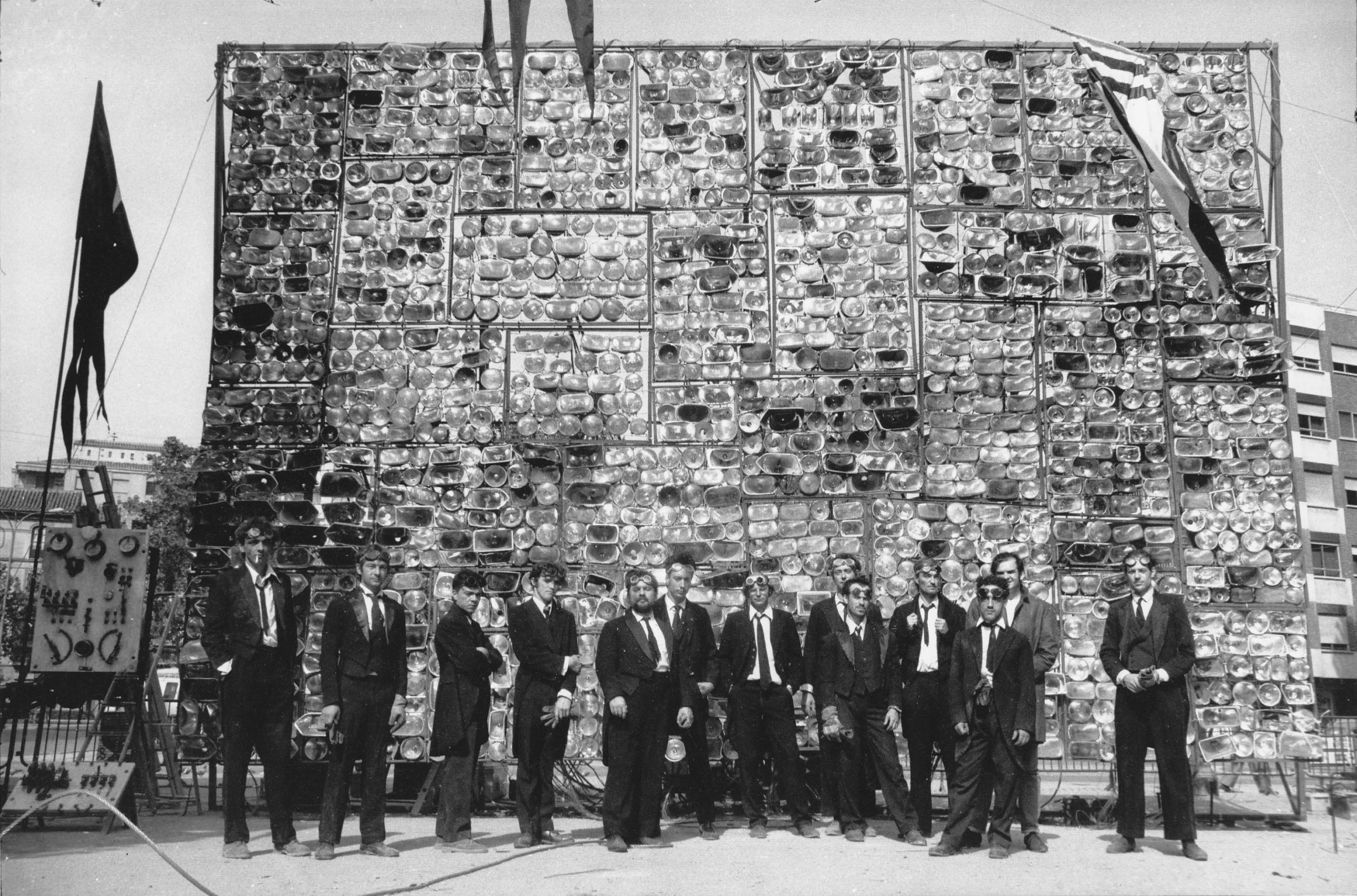 Getting scrap metal from here and there in our warehouses, we started building portcullis, squares, rectangles that we welded together in the spirit of saving money and therefore in different sizes, and on which we tightened iron cables to hang our headlights on. The team was operating like a factory. This being done I calculated the patchwork of the final assembly while huge activities of wiring of each light of each portcullis were intertwining. The only expense came at that moment for the making of current transformers to switch from a 380 volts source to 12 volts on each headlight. 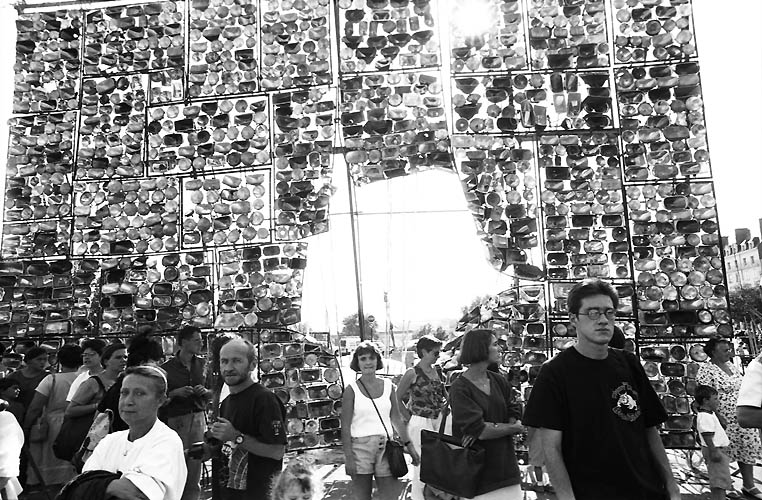 Once the wall was wired, as we did not have any other way we stretched a cable between two tall trees to suspend the whole sculpture. Although considered strong enough the trees were getting closer together because of the weight of the whole thing, poles and other cables did manage to straighten up the wall and we were finally able to switch it on. In order to do that, and as we did not have enough electric power, the electrician of the time connected directly to the electric cables from outside bringing power to the castle. After several attempts, the wall, like a miracle for us, revealed to us the field, the grass, and the trees of the large park. Although not transportable for the moment, it was working. A secondary road passed 200m away from the castle and a few minutes later, drivers finding the entrance to the building were converging on the pathway, getting out of their vehicle, I shall say every 3 or 4 minutes, alone or with family surprised by this yellow light from another world. Then they left. I thought at that moment that they were simply attracted like butterflies to the light. Of course this wall was used a few times during shows of Royal de Luxe. 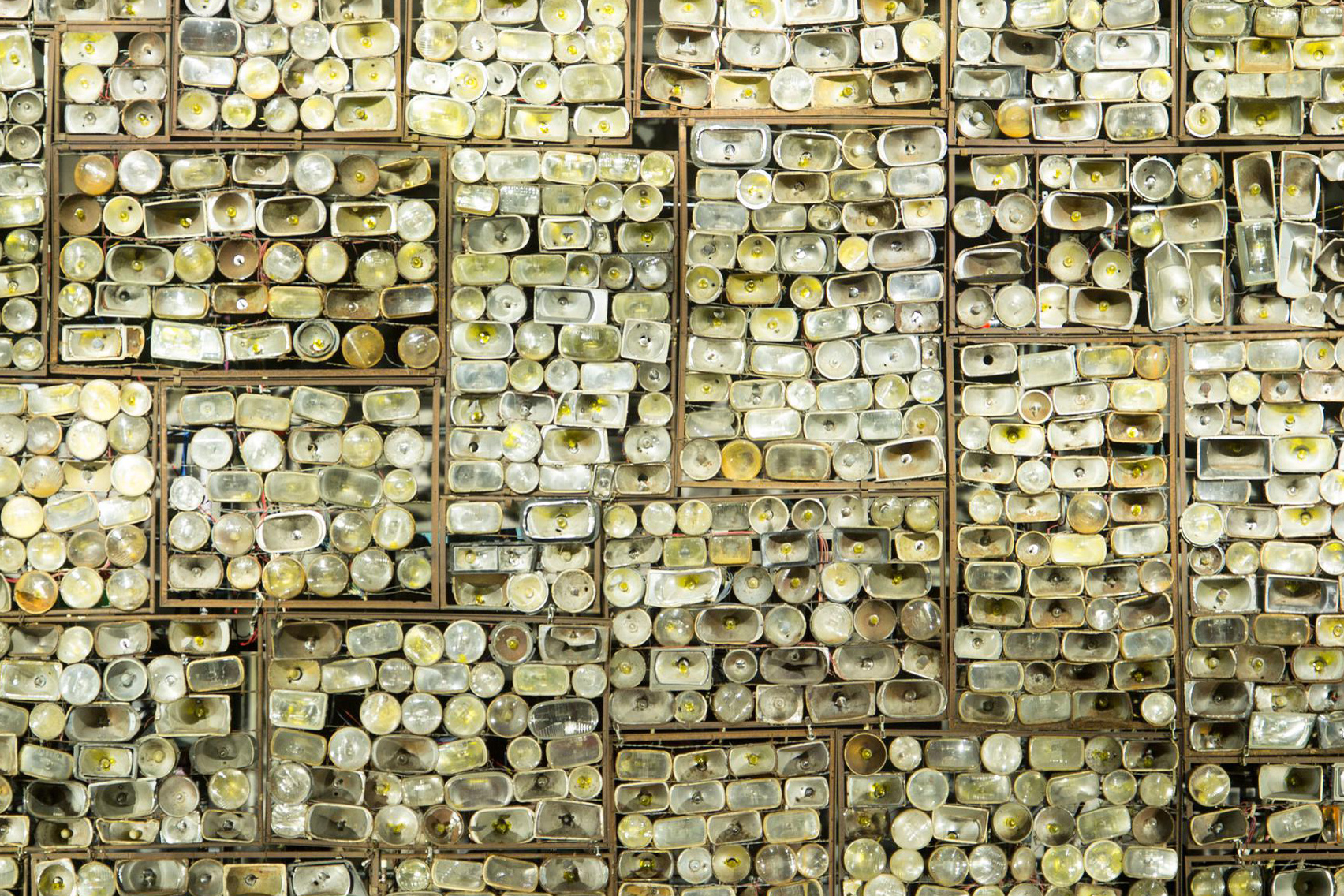 I consider it with time, like a sculpture of modern art, hanging from the top. The portcullis being still independent from one another, it can sometimes, under the effect of the wind or the hand of men, behave like a veil or a wave. Back in those days, spectators were looking for the headlights of their own cars just like children would do. 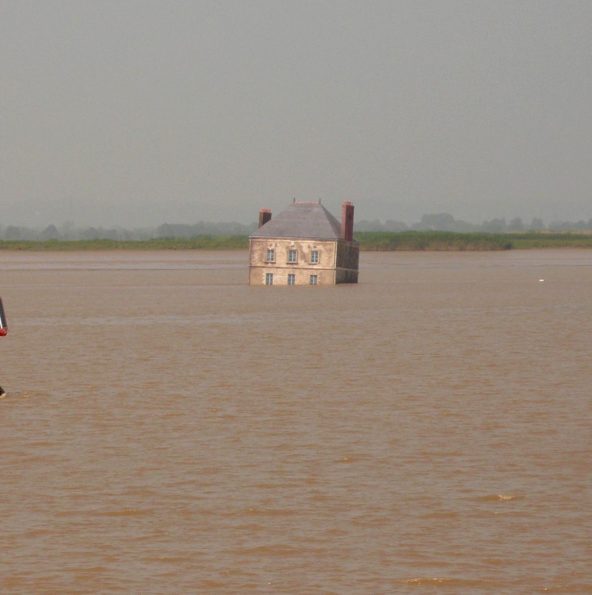 Imaginary situations - 2007 The House in the Loire See the creation 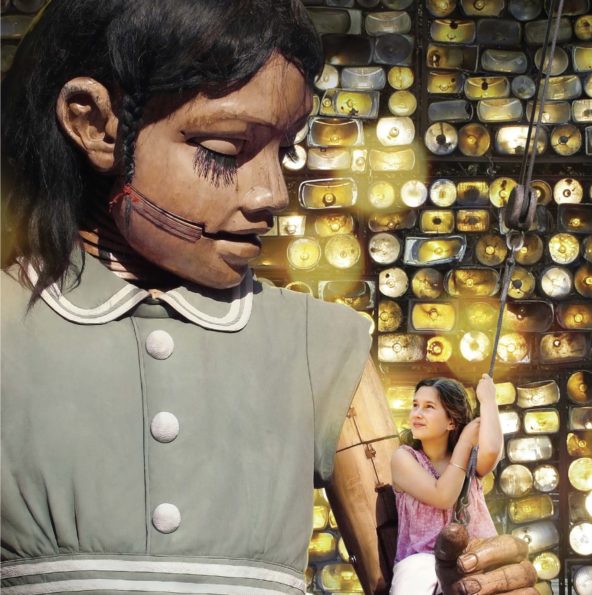